Beyond Good and Evil Part 3: The Lazarus Chamber 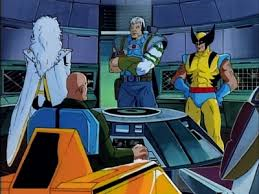 This is the fourteenth episode of the fourth season of X-Men: The Animated Series.

In the year 3999, Cable manages to sneak into a facility and steal a time machine while Tyler Summers, who was waiting outside, is attacked by some robots. Cable manages to fly back in time, unknowingly being watched by Apocalypse, who is at his base in the Axis of Time. Apocalypse diverts Cable's trip so he lands in the present time.

Cable meets up with the X-Men and he is brought up to speed on the kidnapped psychics. Sabretooth, who was captured by the X-Men, is being interrogated by Cyclops but this fails to bring answers. Beast and Shard figure out how Bishop became lost in the time stream. Wolverine takes over the interrogation of Sabretooth and tortures his enemy for information.

Cable tells the X-Men how Apocalypse has to visit his Lazarus Chamber once every hundred years so that the ancient mutant can retain his immortality. Wolverine walks in, dragging Sabretooth, and says that all of the villains the team have been facing are under the employ of Apocalypse. Professor X looks through Sabretooth's mind for further information but all he can see is clocks and images referencing time.

The mutants then decide to all go to the Lazarus Chamber and so they use Cable's time travelling machine to go back to Ancient Egypt. The mutants manage to enter a pyramid but are met by a version of the Horsemen of Apocalypse. Cyclops, Gambit and Archangel fight the Horsemen while Professor X, Beast, Wolverine and Cable venture into the pyramid and stumble across the Lazarus Chamber. However, Apocalypse is there waiting for them and he manages to kidnap Professor X and Wolverine.