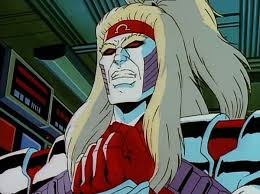 Arkady Rossovich was a Russian soldier who served during the Cold War. He was genetically altered by orders of the Soviet generals and given the code name 'Omega Red'. During the war, Omega Red fought Team X, a fight which he lost and ended up put into cryogenic suspension by his commanders after they found it difficult to control Omega. Only the extreme cold could sedate Omega.

Years later, after the fall of the Soviet Union, some radical generals released Omega from his stasis in the hopes that he would help bring back the Soviets former glory. Omega was paired with Darkstar and the two easily took of Russia's capital and planned to exile the members of the New Parliament. However, the two met resistance from fellow Russian, Colossus and the X-Men, now with ex-Team X member, Wolverine. Omega was eventually defeated after Darkstar turned on him and Storm summoned freezing temperatures which weakened the Russian mercenary. Omega was then put back into cryogenic suspension.

Some time later, Omega was released again and sent to retrieve a sunken submarine which had a nuclear reactor which threatened to explode and destroy a good portion of the U.S.A. Omega requested that Wolverine and Storm join him and together they boarded the submarine. However, Omega soon revealed his true motives and planned to use the nuclear reactor to critically injure America. Storm and Wolverine were able to stop him and Omega was left in the sunken sub, which had submerged deeper into the ocean