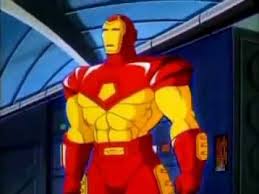 When he was a teenager, Tony was not interested in helping his dad, Walter Stark, and his company, Stark Enterprises. After Justin Hammer organized the death of Walter, Tony grew up and became the C.E.O. of Stark Enterprises, leading the company to new heights. Eventually, Tony was kidnapped by Mandarin and forced to work alongside Wellington Yinsen to create suit of armor for the villain. Tony suffered injuries near his spine, threatening paralysis. In secret, Tony and Yinsen created a suit of armor that Tony was able to use to escape the Mandarin. Some time later, Tony formed Force Works, to help combat Mandarin and The Hand.

At some point, Tony provided Robert Bruce Banner with the materials required to make his gamma reactor, which exploded and turned Banner into the 'Hulk'. Iron Man, alongside Force Works, fought Titanium Man and Dark Aegis. Also, at some point Tony began dating Whitney Frost but left her once she lost her good looks.

Iron Man and Force Works fought Mandarin and The Hand frequently. They stopped him from using radioactive zombies to take over the world and using a controlled Ultimo. Tony was once framed causing a stock market crash and stealing the lost money. He later cleared his name. Tony also helped to rescue Rachel Carpenter, daughter of his teammate and love interest Spider-Woman. Tony also rescued his stolen prototype jet which Mandarin had stolen, He also teamed with M.O.D.O.K. when his wife, Alana Ulanova was threatened by Mandarin.

Tony later had a falling out with Hawkeye when he suspected him off treason, but they later reconciled. Mandarin later invented a robot duplicate of Iron Man and had it threaten the world with spreading Dark Water Fever across it, killing everyone. At this time, Tony was struggling to keep Stark Enterprises from going bankrupt. Tony eventually confronted and destroyed the robot duplicate. Some time after, Tony was trapped in an ice cave and had to repair his armor. He was eventually found by Force Works. Concerned about Mandarin discovering his secret identity, Tony organized a fake wedding between him and Spider-Woman. Mandarin attacked and kidnapped Tony, only to be confronted by Iron Man. It was revealed that the Tony who got married was a robot and the real Tony was in the armor.

After Justin Hammer tried to kill Tony with a car bomb, Tony faked his death as he thought he could work better by himself. Having been revealed that he was actually alive, Force Works disbanded as they thought they couldn't trust their leader anymore. Tony later fought Firebrand and A.I.M., who had engineered a clone of Tony's father, Walter Stark. At this time Tony also fought Crimson Dynamo and his ex-girlfriend, Whitney Frost, now calling herself 'Madame Masque'. Hawkeye briefly returned to the team but left soon again and Tony fought Dark Aegis again.

When Tony fought Crimson Dynamo, he found that the villain had been using stolen Stark technology. Iron Man then went on a mission to retrieve all the stolen Stark technology from the villains who had been using it. This mission put him against his friends and foes alike. Eventually, in a climatic battle with Hammer and his newest weapon Firepower. Iron Man teamed up with Hulk against the Leader.

When Mandarin returned, Tony reformed Force Works and together they managed to defeat the villain once and for all. Tony was seen leading the Avengers, which teamed the Fantastic Four to fight Ego, the Living Planet. Iron Man and War Machine later teamed up with the Hulk again to fight General Thaddeus Ross and his Hulkbusters.