And the Sea Shall Give Up Its Dead 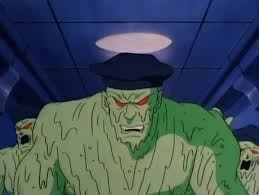 This is the first episode of the first season of Iron-Man: The Animated Series.

Near the Artic, a Russian submarine is being searched for an intruder. The captain finds the intruder, who is revealed to be Hypnotia, who plants device and hypnotizes the crew so that they would become servants of the Mandarin in a years time. The villain then escapes the submarine, flooding it in the process. Meanwhile, Tony Stark receives a physiotherapy session from Veronica Benning when James Rhodes walks in a reminds Tony about a seminar he has to attend. Just then, Whirlwind and Dreadknight attack and manage to steal a microchip from one od Stark's computers. Spider-Woman arrives and tells Stark and Rhodes that the villains have also broke into the armory. The villains manage to reach their base and give the Mandarin the microchip, which he says will synchronize with the device Hypnotia planted on the submarine.

One year later, Stark and Rhodes discuss the Mandarin's attacks the previous year. Admiral Harold Younger contacts the pair and gives them the task of investigating the submarine 'Prometheus' which had just surfaced off the coast of Scotland and is capable of destroying all life on Earth. Outside Stark Enterprises, Hypnotia and M.O.D.O.K. listen in using a special device and warn the Mandarin of their plans. The Mandarin states that he expects Iron Man to help and summons forth the members of The Hand, punishing Blizzard for killing his flowers.

At his office, Stark realizes that the Prometheus's disappearance and the attack last year must be connected. He changes into his Iron Man armor and flies to the Prometheus. While Stark opens a visual channel so Force Works can see what is happening, Justin Hammer opens up the Hammer Channel Tunnel on television. Iron Man arrives at the submarine, using his deep sea armor to reach it, but is attacked by Grey Gargoyle. While other Hand members arrive, Force Works armor up and Century teleports them all to the sub's location. Mandarin summons Fin Fang Foom who attacks Iron Man, knocking him unconscious. War Machine takes Iron Man back to the Armory, where he wakes up and figures out the Mandarin's plan.

Just as he is about to open the tunnel, Justin Hammer gives the Mandarin the signal to activate the device on the Prometheus, releasing its sailors who are now all radioactive zombies. Force Works arrive just as the zombies emerge from the tunnel and begin to fight them. Iron Man manages to flood the tunnel which incapacitates many of the zombies but then M.O.D.O.K. calls in Titanium Man. Iron Man and War Machine fight Titanium Man and manage to launch him back into space. Century turns the zombies back into humans and Mandarin, defeated, vows he will return.