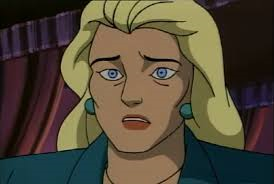 Anastasia Hardy is the mother of Black Cat.

Anastasia was once married to cat burglar John Hardesky, with whom she had a daughter, Felicia. John later put himself in S.H.I.E.L.D. custody and Anastasia raised Felicia by herself. As the head of the Hardy Foundation, Anastasia once agreed to fund the research of Otto Octavius but pulled the plug on funding when his operations became fruitless. Some time after Otto, now Doctor Octopus, kidnapped Felicia and J. Jonah Jameson in return for ransom money from Anastasia. Felicia was saved by Spider-Man.

When Norman Osborn became the Green Goblin, Anastasia, being on the board of directors of OsCorp, was kidnapped by the villain alongside Jameson, Kingpin and Mary Jane Watson but was saved by Spider-Man.

Anastasia later reunited with her estranged husband when he was broken out of S.H.I.E.L.D. custody by Kingpin and Chameleon. At this time, Felicia was given a version of the super soldier serum and transformed into the Black Cat. Soon after Anastasia reunited with Hardesky, he surrendered himself to S.H.I.E.L.D.