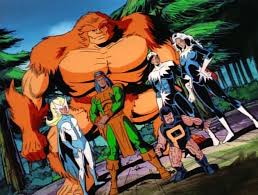 Alpha Flight are a team of Canadian super heroes, sponsored by the Canadian Government.

Alpha Flight are a group of Canadian heroes, organised by James Hudson and his wife, Heather Hudson, in conjuction with Department H, a branch of the Canadian government. When the team first formed, Wolverine was enlisted shortly after he escaped from Weapon X. Logan later left the team for the X-Men. Years later, Alpha flight roped Wolverine back to Canada, where he was analysed under orders from General Chasen. In protest, Heather resigned from her post in Department H and Alpha Flight, minus Vindicator, attacked the lab. After the fight, Alpha Flight let Wolverine return to the X-Men. Some time later, when the Shi'ar's M'Kraan crystal was threatening the galaxy, Alpha Flight were seen helping civilians.