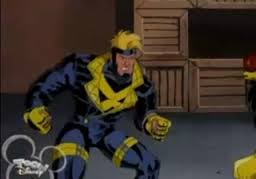 Alexander Summers is also known as the X-Factor member, Havok.

When he was a boy, Alex and his brother Scott Summers, were forced to share a parachute after a plane piloted by their dad, Christopher Summers, was attacked by the Shi'ar. Alex and Scott were separated and adopted into different homes. As he was growing up, Alex discovered his mutant powers and joined the government sponsored team, X-Factor. Whilst there, Alex developed a relationship with his teammate, Polaris.

After Iceman started looking for Polaris and acquired the help of the X-Men, Alex and X-Factor had their first encounter with the team and unbeknownst to each other, Alex fought against his brother Scott, now the X-Man 'Cyclops'. Alex later watched Fabian Cortez's broadcast from Asteroid M, declaring war on humanity.