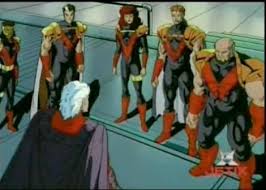 The Acolytes are a group of mutants who are loyal to Magneto.

When Magneto ruled over Asteroid M, the Acolytes served him and helped him and the X-Men to break several mutants out of Genosha. When the mutants wee transported to the asteroid, one of the group, Fabian Cortez, tried to kill Magneto by shooting him off into space. Cortez then blamed the X-Men and declared war on humanity. Magneto survived, however, so he and the rest of the Acolytes, attacked Cortez and seemingly killed him. However, just before he died, Apocalypse and Deathbird saved Cortez.