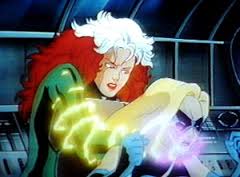 This is the ninth episode of the second season of X-Men: The Animated Series.

Mystique meets up with Mister Sinister in a derelict building and he tells her that Professor X is away from the X-Men at the moment so Mystique would be able to reclaim Rogue. The next day the Brotherhood of Evil Mutants attacks a farmers market and signals the X-Men to come to them. The X-Men arrive and begin to fight the Brotherhood. During the fight, Rogue sees a blonde woman staring at her and Rogue screams as her head begins to hurt. Her team mates are confused as to why she is screaming but Rogue keeps seeing a green monster wearing a mask.

The X-Men return to the mansion and Rogue is placed in the infirmary. She wakes screaming, scaring Cyclops and Gambit. Rogue settles and explains that she's been getting these flashes since the Professor left but doesn't know what he was working on with her as he was blocking out some memories. Jean Grey reveals that she has found some photos of the blonde woman Rogue saw earlier on. Rogue manages to get out of the mansion and finds Wolverine. He turns into the blonde woman and begins taunting Rogue until the X-Man punches her and it is revealed that Rogue was hallucinating and just hit Wolverine. She apologises and after a brief altercation with Gambit, Rogue flies back to the mansion, looking for Jean. After hallucinating that Cyclops was the blonde woman and being constantly haunted by her voice, Rogue crashes through the mansion up to the roof and flies away.

Storm later finds Rogue at the statue of liberty and she tries to console her team mate. However, Rogue sees a vision of the blonde woman and chases her to a hospital. Storm follows her but she is ambushed by Mystique and Blob. Meanwhile, the blonde woman is lying on a hospital bed, in a coma. The doctors say she has been there for a while but no one knows her name. Cyclops, Wolverine and Gambit arrive at the hospital but are attacked by the Brotherhood. The three are almost beaten when Storm arrives and sucks up the villains in a tornado.

In the hospital, Rogue follows the blonde woman to a room where the real woman is lying in a coma and the other woman transforms into Mystique. Mystique manages to get Rogue to touch her so she'll absorb her memories. Doing this, Rogue remembers her first kiss with Cody Robbins and how she first developed her powers. Her father had kicked her out for being a mutant. Soon after, Rogue met a woman (Mystique in disguise) who adopted Rogue and taught her how to use her powers. Later, Rogue and the newly formed Brotherhood were attempting to steal a jet when they were confronted by Ms Marvel. Rogue was forced to use her powers on Ms Marvel, revealing that Rogue had permanently absorbed the heroine's powers and that the blonde woman tormenting Rogue was actually Ms Marvel.

Rogue became disgusted with Mystique for making her do that to Ms Marvel and she further remembers how she became haunted by images of the heroine and so she left the Brotherhood and found Xavier, who helped Rogue and blocked out Ms Marvel from her mind. In the present, Rogue begins to shape shift into Ms Marvel, as she had absorbed Mystique's powers as well. Ms Marvel claims to be taking over Rogue's mind and she flies off with Mystique, Storm following close behind them. At the mansion, Jean uses Cerebro to enter Rogue/Ms Marvel's mind. There, she fights with Marvel and works with Rogue to contain the rampaging heroine. Rogue regains control of her mind and rejects Mystique, saying she is an X-Man now.

The next day, Rogue visits Ms Marvel at the hospital, telling the doctors that her name is 'Carol Danvers'. Rogue brushes the hair off of Carol's face and this allows Carol's consciousness to travel back to her body. Rogue leaves the room and a smile forms on Carol's face.